The pianist Konstanze Eickhorst is not a musician who is easily pigeonholed: she is a soloist, a chamber musician and a teacher. “These are the three pillars on which my musical life is built,” she said in a recently broadcast interview.

Konstanze Eickhorst grew up in Bremen and began taking piano and recorder lessons at five. When she was eleven, Karl-Heinz Hämmerling admitted her to his piano class at the Hochschule für Musik und Theater in Hanover and remained her most important mentor during her studies. In Paris, Vlado Perlemuter gave Konstanze Eickhorst further decisive artistic impetus.

Winning First Prize at the “Clara Haskil” and “Geza Anda” international competitions and her award-winning performance at the International Bach Competition Toronto (in memory of Glenn Gould) launched her successful career, that has led Konstanze Eickhorst to renowned festivals and appear with leading orchestras. Among others, she collaborates with conductors Christoph Eschenbach, Andrew Davis, Peter Schneider, Manfred Honeck and Ingo Metzmacher.

She discovered her passion for chamber music very early on. Konstanze Eickhorst is a member of the Linos Ensemble, which performs in formations from a duo to a nonet. Numerous CDs featuring Konstanze Eickhorst as a soloist and as a chamber musician have been recorded. They document the breadth of her repertoire and also her penchant for discovering rarely played literature. She and the Linos Ensemble jointly received the ECHO Klassik Award in 2017 for their recording of the A major Piano Quintet by Franz Schmidt (for piano left hand).

Konstanze Eickhorst was appointed professor at the University in Hanover when she was 28; a few years later, she continued her pedagogical work at the Musikhochschule Lübeck. In 2016, she accepted a position as visiting professor at the Academy of Music in Kraków.

Her desire is to pass on her experience as a musician. Konstanze Eickhorst teaches master classes, also for chamber music, serves on the juries of international competitions and is chair of the European Piano Competition at Bremen. 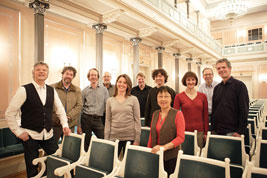