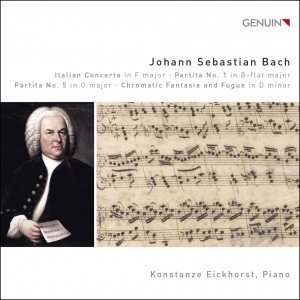 Konstanze Eickhorst has a very personal relationship with Johann Sebastian Bach. As a versatile soloist and chamber musician, esteemed professor at the Lübeck Musikhochschule and artistic director of the European Piano Competition at Bremen, she has devoted much time and attention to the works of Bach, the most famous of all the cantors at St Thomas’s Leipzig, and has done so ever since her earliest childhood.

“Johann Sebastian Bach is the alpha and omega of music, an intellectual and emotional challenge to both the player and the listener. Many paths lead to him and to a love of his music. More than any other composer, he can sustain the widest possible range of approaches to interpretation,” says Konstanze Eickhorst, who, all her life, has been so fascinated by his works that while studying them she used to lose track of time and place.

»Everything is marked by highly clear and yet pliable articulation which breathes life into the music.« Classical Music Sentinel, 3/2020

This website uses cookies to improve your experience while you navigate through the website. Out of these cookies, the cookies that are categorized as necessary are stored on your browser as they are essential for the working of basic functionalities of the website. We also use third-party cookies that help us analyze and understand how you use this website. These cookies will be stored in your browser only with your consent. You also have the option to opt-out of these cookies. But opting out of some of these cookies may have an effect on your browsing experience.
Necessary immer aktiv
Necessary cookies are absolutely essential for the website to function properly. This category only includes cookies that ensures basic functionalities and security features of the website. These cookies do not store any personal information.
Non-necessary
Any cookies that may not be particularly necessary for the website to function and is used specifically to collect user personal data via analytics, ads, other embedded contents are termed as non-necessary cookies. It is mandatory to procure user consent prior to running these cookies on your website.
SPEICHERN & AKZEPTIEREN
Nach oben